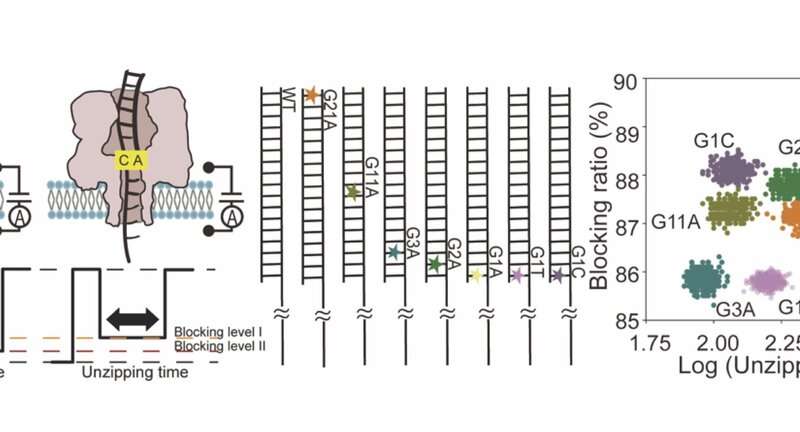 In recent years, a non-invasive biopsy method called liquid biopsy has shown promise as a potential alternative to tissue biopsy, currently the gold standard in cancer detection and diagnosis. A tissue biopsy sample—traditionally collected through a surgical procedure that may require general anesthesia, accompanied by the risk of complications that may occur from any surgery, from pain through to infection and pneumonia—is typically tested for specific genetic variations, also referred to as mutations, which may offer information on a clear optimal treatment for that cancer.

Liquid biopsies, on the other hand, identify the presence of tumor DNA fragments or cells circulating in bodily fluids like blood, urine or saliva—called circulating tumor DNA (ctDNA)—and spares patients from unnecessary harm. Unfortunately, the minute amount of ctDNA in bodily fluids and their short-lived nature remain a challenge for real-life applications.

But biotech researchers at the Tokyo University of Agriculture and Technology (TUAT) have developed a nanopore technique which, in laboratory tests, has shown potential to offer a powerful, quick-and-easy tool for mutation detection.

The findings were published on Aug 9th, 2020, in the peer-reviewed journal Small Methods.

Nanopore measurements, a third-generation genetic sequencing technology, passes a DNA molecule through a nano-scale hole, or 'pore.' As it transits the pore, the DNA nucleotide bases (adenine [A], cytosine [C], guanine [G], or thymine [T]) cause changes in electrical charge that are specific to each of those bases and which can be cataloged, much like passing sand through a series of sifters. Nanopore tech can also sense the translocation, or exchange of genetic material, of short DNA strands via a blocking of the electric current when the pore is open. In both cases, second-generation measurement run times last anywhere from 4-9 days. But nanopore measurements occur in real time.

The rapid and cheap nanopore technique is often used for whole genome sequencing, but its use for ctDNA analysis remains underdeveloped. Nanopore sequencing is skilled in long read-lengths (>10,000-50,000 nt). Sequencing ctDNA (~150 bp) needs earlier stage processing like giving multiple copies of the original ctDNA to stretch targets. While attempts at approaches using nanopore tech for directly ctDNA detection have been made, and are able to recognize the presence or absence of a single genetic mutation, so far, they have been unable to recognize the position of this mutation.

The TUAT method, based on statistical analysis of the length of time it takes for the genetic code to unzip, and of the blocking of the current, allowing both the presence and position of a mutation to be identified. It has so far only been used on short strips of genetic material, or oligonucleotides, not in real-world liquid biopsies.

"This is still at the proof-of-concept stage, but it is exciting not just because it could permit earlier detection," said Ryuji Kawano, one of the two engineers responsible for devising the new method, "but the technique could be used to assess the degree of metastasis [cancer growth] to how well anticancer drugs are working."

The researchers now hope to work with medical institutions to verify and catalog the location of mutations in ctDNA from a many different cancers in order to develop this method as a simple diagnostic method for a wide range of occurrences of the disease.