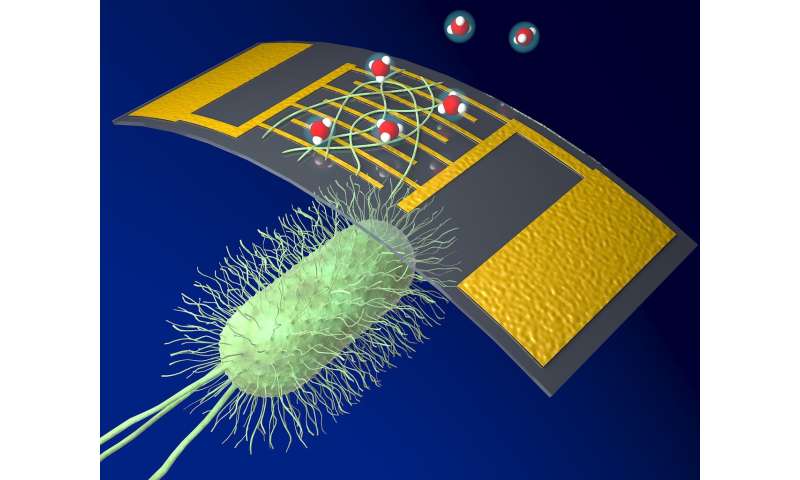 Writing in the journal NanoResearch, a team at the University of Massachusetts Amherst reports this week that they have developed bioelectronic ammonia gas sensors that are among the most sensitive ever made.

The sensor uses electric-charge-conducting protein nanowires derived from the bacterium Geobacter to provide biomaterials for electrical devices. More than 30 years ago, senior author and microbiologist Derek Lovley discovered Geobacter in river mud. The microbes grow hair-like protein filaments that work as nanoscale "wires" to transfer charges for their nourishment and to communicate with other bacteria.

First author and biomedical engineering doctoral student Alexander Smith, with his advisor Jun Yao and Lovley, say they designed this first sensor to measure ammonia because that gas is important to agriculture, the environment and biomedicine. For example, in humans, ammonia on the breath may signal disease, while in poultry farming, the gas must be closely monitored and controlled for bird health and comfort and to avoid feed imbalances and production losses.

Yao says, "This sensor allows you to do high-precision sensing; it's much better than previous electronic sensors." Smith adds, "Every time I do a new experiment, I'm pleasantly surprised. We didn't expect them to work as well as they have. I really think they could have a real positive impact on the world."

Smith says existing electronic sensors often have either limited or low sensitivity, and they are prone to interference from other gases. In addition to superior function and low cost, he adds, "our sensors are biodegradable so they do not produce electronic waste, and they are produced sustainably by bacteria using renewable feedstocks without the need for toxic chemicals."

Smith conducted the experiments over the past 18 months as part of his Ph.D. work. It was known from Lovley's earlier studies that the protein nanowires' conductivity changed in response to pH—the acid or base level- of solution around the protein nanowires. This moved the researchers to test the idea that they could be highly responsive to molecule binding for biosensing. "If you expose them to a chemical, the properties change and you can measure the response," Smith notes.

When he exposed the nanowires to ammonia, "the response was really noticeable and significant," Smith says. "Early on, we found we could tune the sensors in a way that shows this significant response. They are really sensitive to ammonia and much less to other compounds, so the sensors can be very specific."

Lovley adds, that the "very stable" nanowires last a long time, the sensor functions consistently and robustly after months of use, and work so well "it is remarkable."

Yao says, "These protein nanowires are always amazing me. This new use is in a completely different area than we had worked in before." Previously, the team has reported using protein nanowires to harvest energy from humidity and applying them as memristors for biological computing.

Smith, who calls himself "entrepreneurial," won first place in UMass Amherst's 2018 Innovation Challenge for the startup business plan for the company he formed with Yao and Lovley, e-Biologics. The researchers have followed up with a patent application, fundraising, business development and research and development plans.

Lovley says, "This work is the first proof-of-concept for the nanowire sensor. Once we get back in the lab, we'll develop sensors for other compounds. We are working on tuning them for an array of other compounds."