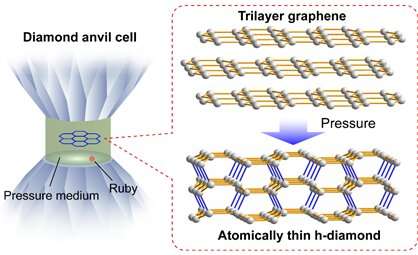 Atomically thin diamond, also called diamane, is a two-dimensional carbon allotrope and has attracted considerable scientific interest due to its potential physical properties. However, previous studies suggest that atomically thin diamond films are not achievable in a pristine state because diamonds possess a three-dimensional crystalline structure and would lack chemical stability when thinned down to the thickness of diamond's unit cell due to the dangling sp3 bonds. Chemical functionalization of the surface carbons with specific chemical groups was considered necessary to stabilize the two-dimensional structure, such as surface hydrogenation or fluorination, and various substrates have also been used in these synthesizing attempts. But all of these attempts change the composition of diamond films, that is to say, the successful synthesis of a pristine diamane has up until now not been achieved.

Regulating the phase transition process of carbon materials under high pressure and high temperature is always a straightforward method for achieving diamondization. Here, a team of scientists led by Drs. Feng Ke and Bin Chen from HPSTAR (the Center for High Pressure Science and Technology Advanced Research) used this direct approach, diamondization of mechanically exfoliated few-layer graphene via compression, to synthesize the long-sought-after diamane film. The study is published in Nano Letters.

The diamondization process is usually accompanied by an opening of an energy gap and a dramatic resistance increase due to the sp2-sp3 rehybridization between carbon atoms. "The in-situ electrical transport measurements of few-layer graphene are difficult to carry out under high pressure," said Feng Ke. "However, using our recently developed photolithography-based microwiring technique to prepare film electrodes on a diamond surface for resistance measurements, we are able to study the pressure-induced sp2-sp3 diamondization transition of mechanically exfoliated graphene with layer thickness ranging from 12- to bilayer at room temperature."

Their studies demonstrate that pristine h-diamane could be synthesized by compressing trilayer and thicker graphene to above 20 GPa at room temperature, which once synthesized could be preserved to about 1.0 GPa upon decompression. "The optical absorption reveals that h-diamane has an energy gap of 2.8 ± 0.3 eV, and further band structure calculations confirm an indirect band gap of 2.7-2.9 eV," explained the co-frist-author Lingkong Zhang, a Ph.D. student at HPSTAR. "Compared to gapless graphene, semiconducting h-diamane offers exciting possibilities for carbon-based electronic devices."

"Like the discovery of graphene, carbon nanotubes, fullerenes, and other novel carbon allotropes, the realization of a pristine diamane represents another exciting achievement in materials science," added Dr. Bin Chen, "Thermal treatment at high pressure may be helpful to preserve a pristine h-diamane to ambient pressure, as suggested from the high-temperature and high-pressure method to synthesize a pressure quenchable h-diamond. The challenges still remain to achieve the preservation and industrial applications of diamane."