Nanoparticle jamming at the water-oil interface 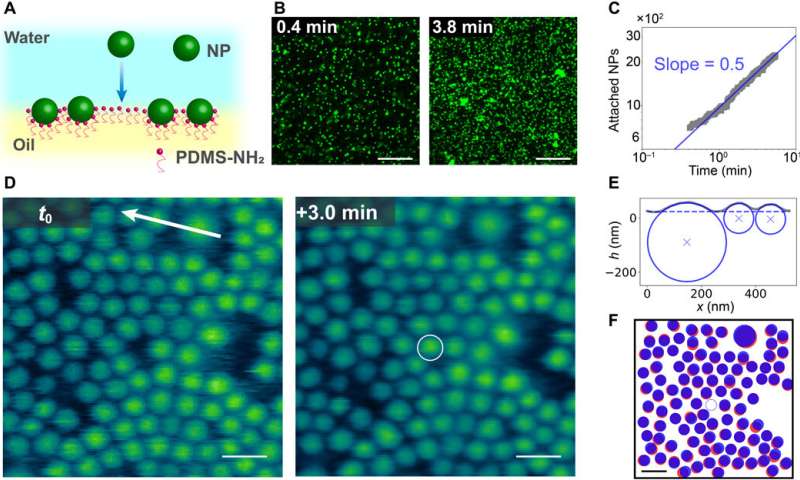 Attachment of NPs to sparsely populated water-oil interface. (A) Schematic diagram showing the attachment of a NP to the pristine water–oil interface. (B) Confocal microscopy images showing the attachment of 500-nm NPs to the water-oil interface. (C) Number of attached 500-nm NPs as a function of time, where the slope follows at power law of 0.5. (D) In situ AFM image of 100- and 300-nm NPs assembled at the water-oil interface at different times: t0 and t0 3.0 min, with a circle highlighting an attachment event. (E) Section data along arrow in (D) showing fit for NP diameter size and position in the interface. (F) Positions of the assembled NPs at different times: t0 (red) and t0 3.0 min (blue), where the open blue circle represents the newly attached NP. Scale bars, 20 μm (B) and 200 nm (D and F). Credit: Science Advances, doi: 10.1126/sciadv.abb8675

The online cover of Science Advances this week features the assembly of nanoparticle surfactants at a solid-liquid interface using advanced microscopy techniques such as laser scanning confocal microscopy and atomic force microscopy. Materials scientists had explored the assembly of solids at a liquid interface for decades to understand ore (a complex and stable chemical compound) purification, emulsion and encapsulation processes. In a new report, Yu Chai and a research team at the Lawrence Berkeley National Laboratory, University of California Berkeley, the Hong Kong Polytechnic University and the Tohoku University, in the U.S., China and Japan, showed how electrostatic interactions between nanoparticles and ligands formed nanoparticle surfactants at water-oil interfaces. The resulting 'jammed' structures produced a solid-like layer. When the area density of the nanoparticle surfactants increased at the interface, further attachment required cooperative displacement of previously assembled nanoparticle surfactants. The high space-time resolution of their observations revealed the complex mechanism of attachment and the nature of nanoparticle assembly.

In this work, Chai et al. used atomic force microscopy (AFM) coupled with laser scanning confocal microscopy (LSCM) to obtain remarkable details of solids at liquid interfaces to provide insight into the nanoparticle jamming phenomena. Materials researchers in applied engineering are interested on the assembly of solids at liquid interfaces for applications such as ore purification, emulsion and encapsulation based on interfacial segregation. When the particle size decreases, the binding energy of the particle at the interface can decrease, resulting in the adsorption and desorption of nanoparticles. If nanoparticles that are soluble in one liquid interacts with end-functionalized ligands in a second immiscible liquid, researchers can increase the binding energy of nanoparticles to the interface to form nanoparticle surfactants. The very high binding energy of adsorption can drive the system to a non-equilibrium state. 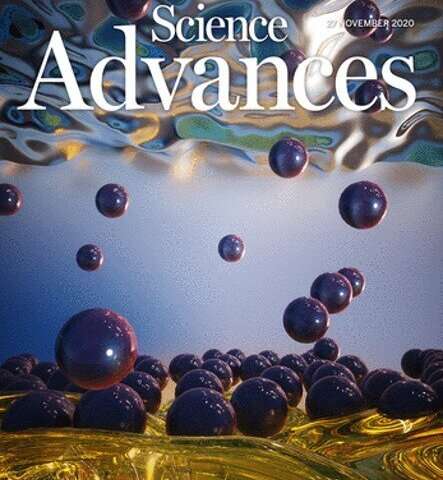 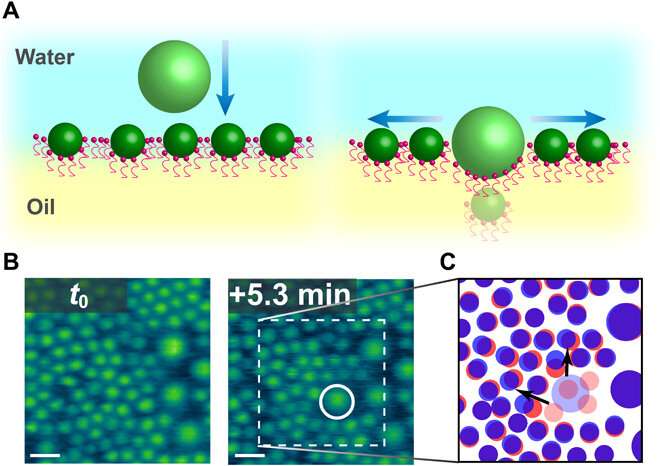 Attachment of 300-nm NPs to thoroughly populated water-oil interface. (A) Schematic diagram of the attachment of a 300-nm NP where previous NPs are displaced laterally and vertically. (B) Time-dependent in situ AFM showing the attachment of 300-nm NP to the water-oil interface, where the white circle indicates the newly adsorbed NP. (C) NPS positions at t0 (red) and t0 5.3 min (blue), where the faded blue dot represents the newly attached NP and the faded red dots represent NPSs that cannot be located by AFM after attachment of the newly attached NP. Scale bars, 200 nm. Credit: Science Advances, doi: 10.1126/sciadv.abb8675 Observing nanoparticle rearrangement

When the local area density of nanoparticles at the interface increased, there was insufficient space to accommodate the entry of new nanoparticles; therefore, the assembly rearranged on its own. Chai et al. noted this rearrangement using atomic force microscopy, although they did not quantify the observed fluctuations. They observed cooperative structural changes of assembled nanoparticles at the interface to accommodate the attachment of additional particles. Interestingly, several nanoparticles were not detectable, potentially trapped beneath larger nanoparticles added to the system; however, the team could not observe this phenomenon using atomic force microscopy alone. Chai et al. therefore reintegrated laser scanning confocal microscopy (LSCM) to the setup to provide insight to the addition of excess nanoparticles to the already dense assemblies. 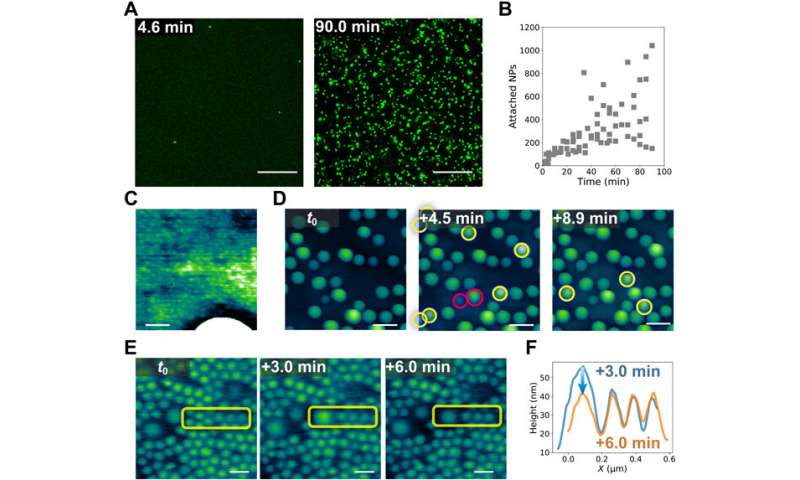 The scientists further incorporated LSCM (laser scanning confocal microscopy) experiments to investigate the mixed dispersion of nanoparticles of varying size to probe their dynamic co-assembly. While large and small particles co-assembled at the interface, only the large nanoparticles could be clearly resolved. Interestingly, the team noted many dark areas in the form of cracks, likely from the contact between water and oil phases in the setup. The crack formation further exposed new interfacial areas, which eventually self-healed as an important trademark of structured liquids to maintain their integrity in general.

In this way, Yu Chai and colleagues investigated the assembly of nanoparticles at the water-oil interface and examined the factors controlling the process of adsorption. By interchangeably using AFM (atomic force microscopy) and LSCM (laser scanning confocal microscopy), they noted structural changes occurring at the early stage of nanoparticle attachment to the interface, including diffusion-controlled processes. The attachment process was reaction-controlled, where the existing assembly posed an electrostatic barrier to additional nanoparticles approaching the interface; thereby coordinating their rearrangement to accommodate the attachment of new nanoparticles. Using advanced microscopy techniques, the team detailed the attachment process under diverse conditions at high resolution to provide insight to adsorption and jamming in order to aid the design and fabrication of responsive assemblies.