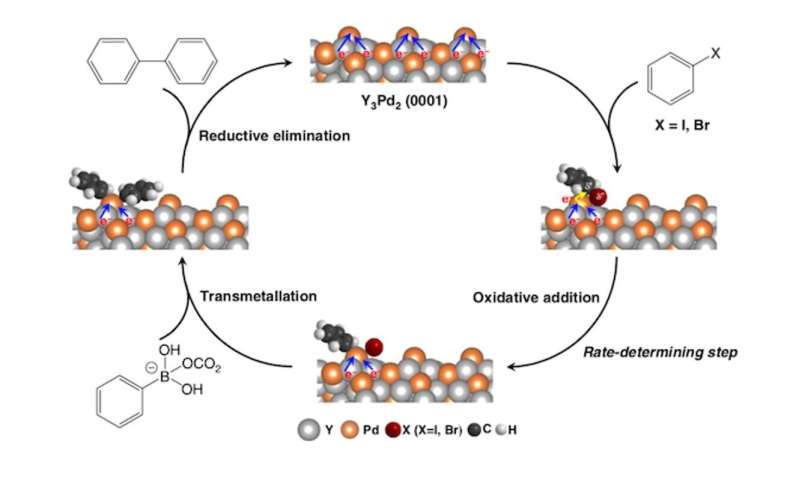 A group of materials scientists at Tokyo Institute of Technology has shown that a palladium-based intermetallic electride, Y3Pd2, can improve the efficiency of carbon-carbon cross-coupling reactions. Their findings point the way to a more sustainable world through catalysis.

Researchers at Tokyo Institute of Technology (Tokyo Tech) have developed an electride material composed of yttrium and palladium (Y3Pd2) as a catalyst for Suzuki cross-coupling reactions. These reactions are among the most widely used for the formation of carbon-carbon bonds in organic and medicinal chemistry.

Y3Pd2 was predicted to be an effective electride based on theoretical calculations, explains Tian-Nan Ye, an assistant professor at Tokyo Tech's Materials Research Center for Element Strategy and first author of the study published in Nature Communications. "In an electride, anionic electrons are trapped in interstitial sites and typically host a strong electron donation effect," he says. "This feature motivated us to apply Y3Pd2 as a Suzuki coupling reaction catalyst as the reaction barrier of the rate-determining step can be suppressed through electron transfer from the electride to the substrates."

In lab tests, the catalytic activity of Y3Pd2 was shown to be ten times higher than that achieved by a pure Pd catalyst, and the activation energy was reduced by 35%.

What makes Y3Pd2 so efficient and stable is the successful incorporation of active Pd atoms in an intermetallic electride lattice. "The stabilized Pd active sites in our crystalline lattice solve the problems of aggregation and leaching that have commonly occurred in other systems reported so far," says Ye. "This makes our catalyst extremely robust and stable for long-term usage, without deactivation."

The reusability of the catalyst (up to 20 cycles) and the relative ease with which Pd atoms can be recovered represents an important step to achieving greater sustainability in the chemical industry.

The idea of combining yttrium and palladium was sparked by the work of Jens Kehlet Nørskov, now at Stanford University, says Ye. In 2009, Nørskov and co-workers published groundbreaking findings on catalysts made of platinum alloyed with early transition metals, including yttrium. Since then, many groups have been investigating new combinations of intermetallic compounds (consisting of a rare earth metal and an active transition metal), with the goal of developing much more efficient catalysts for the chemical industry.

Through a series of calculations and experimental studies, Ye and his team showed that Y3Pd2 has a strong electron-donating effect associated with a low work function and high carrier density—features that enable the catalyst to work at a much lower activation energy than that of a pure Pd catalyst.

One remaining challenge is the relatively low surface area of Y3Pd2. To tackle this issue, the team used a pulverizing technique called ball-milling and compared catalytic activity using different solvents such as heptane and ethanol. In all of the samples investigated so far, the team found that the Suzuki coupling reaction rate increased in proportion to the increase in surface area. These initial results are "very promising," says Ye, suggesting that "catalytic performance could be improved through further nanocrystallization."