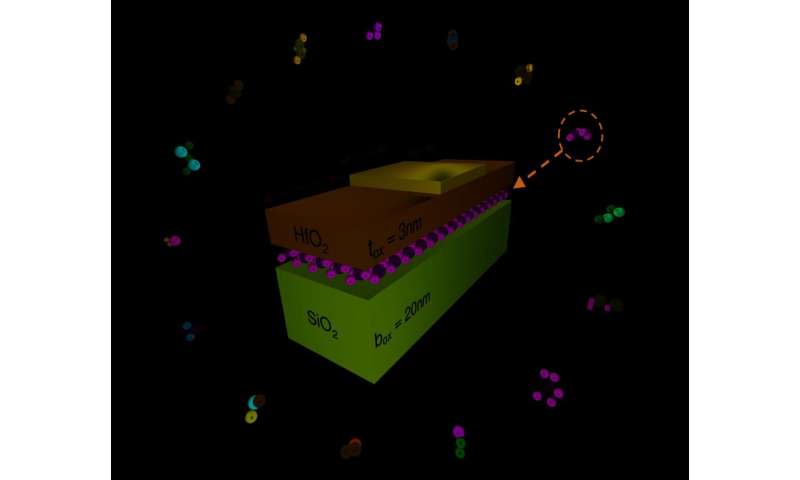 Arranged around it are a selection of 2-D materials that have been investigated.

With the increasing miniaturization of electronic components, researchers are struggling with undesirable side effects: In the case of nanometer-scale transistors made of conventional materials such as silicon, quantum effects occur that impair their functionality. One of these quantum effects, for example, is additional leakage currents, i.e. currents that flow "astray" and not via the conductor provided between the source and drain contacts. It is therefore believed that Moore's scaling law, which states that the number of integrated circuits per unit area doubles every 12-18 months, will reach its limits in the near future because of the increasing challenges associated with the miniaturization of their active components. This ultimately means that the currently manufactured silicon-based transistors—called FinFETs and equipping almost every supercomputer—can no longer be made arbitrarily smaller due to quantum effects.

However, a new study by researchers at ETH Zurich and EPF Lausanne shows that this problem could be overcome with new two-dimensional (2-D) materials—or at least that is what the simulations they have carried out on the "Piz Daint" supercomputer suggest.

The research group, led by Mathieu Luisier from the Institute for Integrated Systems (IIS) at ETH Zurich and Nicola Marzari from EPF Lausanne, used the research results that Marzari and his team had already achieved as the basis for their new simulations: Back in 2018, 14 years after the discovery of graphene first made it clear that two-dimensional materials could be produced, they used complex simulations on "Piz Daint" to sift through a pool of more than 100,000 materials; they extracted 1,825 promising components from which 2-D layers of material could be obtained.

The researchers selected 100 candidates from these more than 1,800 materials, each of which consists of a monolayer of atoms and could be suitable for the construction of ultra-scaled field-effect transistors (FETs). They have now investigated their properties under the "ab initio" microscope. In other words, they used the CSCS supercomputer "Piz Daint" to first determine the atomic structure of these materials using density functional theory (DFT). They then combined these calculations with a so-called Quantum Transport solver to simulate the electron and hole current flows through the virtually generated transistors. The Quantum Transport Simulator used was developed by Luisier together with another ETH research team, and the underlying method was awarded the Gordon Bell Prize in 2019.

The decisive factor for the transistor's viability is whether the current can be optimally controlled by one or several gate contact(s). Thanks to the ultra-thin nature of 2-D materials—usually thinner than a nanometer—a single gate contact can modulate the flow of electrons and hole currents, thus completely switching a transistor on and off.

Structure of a single-gate FET with a channel made of a 2-D material. Arranged around it are a selection of 2-D materials that have been investigated. (Mathieu Luisier/ETH Zürich)

"Although all 2-D materials have this property, not all of them lend themselves to logic applications," Luisier emphasizes, "only those that have a large enough band gap between the valence band and conduction band." Materials with a suitable band gap prevent so-called tunnel effects of the electrons and thus the leakage currents caused by them. It is precisely these materials that the researchers were looking for in their simulations.

Their aim was to find 2-D materials that can supply a current greater than 3 milliamperes per micrometer, both as n-type transistors (electron transport) and as p-type transistors (hole transport), and whose channel length can be as small as 5 nanometres without impairing the switching behavior. "Only when these conditions are met can transistors based on two-dimensional materials surpass conventional Si FinFETs," says Luisier.

The ball is now in the experimental researchers' court

Taking these aspects into account, the researchers identified 13 possible 2-D materials with which future transistors could be built and which could also enable the continuation of Moore's scaling law. Some of these materials are already known, for example black phosphorus or HfS2, but Luisier emphasizes that others are completely new—compounds such as Ag2N6 or O6Sb4.

"We have created one of the largest databases of transistor materials thanks to our simulations. With these results, we hope to motivate experimentalists working with 2-D materials to exfoliate new crystals and create next-generation logic switches," says the ETH professor. The research groups led by Luisier and Marzari work closely together at the National Centre of Competence in Research (NCCR) MARVEL and have now published their latest joint results in the journal ACS Nano. They are confident that transistors based on these new materials could replace those made of silicon or of the currently popular transition metal dichalcogenides.

What are Amorphous Boron Powder?…

Global quartz powder market trend 2022-2030 What is The Mohs Hardness Scale? by Newsmis-asia…

Now China has become a powerful country in science and technology, but do you know how powerful China's technology is? The manned space station alone is not enough, and now it has successfully broken through the key technology of nuclear fusion, even…