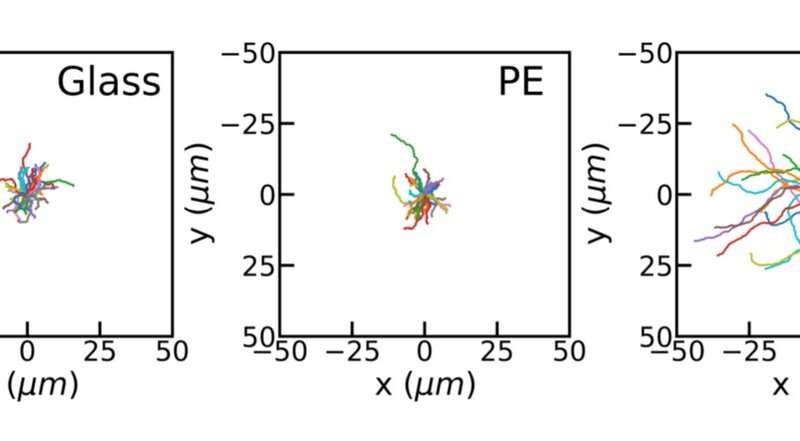 Tiny self-propelling spheres, measuring only micrometers, move faster over a hydrophobic silicone surface than they do over hydrophilic glass. "Almost nobody had realized that the substrate matters," says Stefania Ketzetzi, the researcher who discovered the effect, researched it and explained it. She publishes about it in the journal Physical Review Letters.

"This was an accidental discovery," says Ketzetzi, a scientist in the Daniela Kraft group, who researches microswimmers. These are tiny colloidal spheres measuring only micrometers. One half of the sphere is covered in a thin layer of platinum.

When these particles are suspended in a hydrogen peroxide solution, the platinum acts as a catalyst. It promotes the chemical reaction of hydrogen peroxide into water and oxygen. The formation of reaction products on one side of the particle creates a fluid flow that propels the particle like a tiny rocket. Because of their self-propulsion, they are called 'active' particles. One day, they may be applied as motor parts for micro-robots.

"I stumbled upon the substrate effect while working on a project for which I needed to use polymer-coated glasses as substrates," says Ketzetzi about the publication in Physical Review Letters. "Those substrates were highly hydrophilic. I noticed that the same swimmers were moving much slower. Why?" Together with group leader Kraft, she decided to investigate.

An explanation was found with help from theoretical physicist Joost de Graaf of Utrecht University. The contact angle of the solution on the substrate relates to the slipperiness of the substrate. The larger the contact angle, the more slippery the substrate, and so the easier for the fluid to flow along it.

"It turns out that the slipperiness of the substrate makes a difference for the propulsion speeds," says Ketzetzi. The propulsion comes from flows of fluid around the particle. When a particle moves over a substrate, part of these flows will flow between the particle and the surface. This will be easier on slippery, hydrophobic surfaces.

The next step, Ketzetzi says, is to investigate how to use this. One could think of applications like lab-on-a-chip, a miniature chemical lab, or of drug delivery, where drugs are targeted and delivered to particular locations in the body. Ketzetzi: "In applications swimmers will have to self-propel in complex environments with confining walls and obstacles. It is important to understand the effect that these have on the swimmer. Using this new knowledge, we can understand and possibly control the behavior of the microswimmers."

It's closeness that counts: How proximity affects the resistance of graphene