Nanoscopy through a plasmonic nanolens 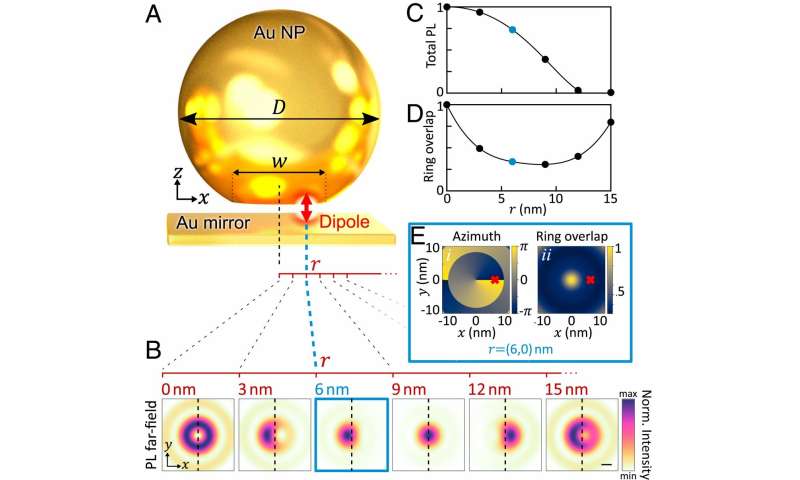 Imaging at the scale of a single molecule has gained much recent research interest in diverse fields of molecular biology, physics and nanotechnology. Researchers have used super-resolution microscopy to access subdiffraction resolution, but the technique does not apply for plasmonic nanoparticle dimer structures that form intense areas of field enhancement also known as plasmonic hot spots, due to plasmonic coupling (interaction between two or more plasmonic particles) and the loss of positional information. In a recent study, Matthew J. Horton and a team of interdisciplinary researchers in the NanoPhotonics Centre at the University of Cambridge, Blackett Laboratory at the Imperial College of London, and the School of Physics and Astronomy at the University of Birmingham, U.K., reconstructed the locations of molecules within a plasmonic hotspot with 1-nm precision.

To accomplish this, they used a plasmonic nanoball lens and established plasmonic nanocavities as a nanoscopic and spectroscopic tool. The work opens new possibilities to study the behavior of molecules ranging from a few molecules down to a single molecule within a plasmonic nano-resonator, while simultaneously tracking their movement and spectral features. The newly developed plasmonic nanolens is useful for nanosensing, nanochemistry and bioimaging—the work is now published in the Proceedings of the National Academy of Sciences of the United States of America (PNAS). In this work, Horton et al. used ultrathin plasmonic nanogaps to support complete mode sets that strongly influence far-field emission patterns of embedded photonic emitters, to reconstruct dipole positions with 1 nm precision. Based on their locations in a plasmonic hotspot, the emitters radiated three scattering distribution types to form spots, rings and askew halo images; to highlight the imaging potential of these plasmonic "crystal balls." 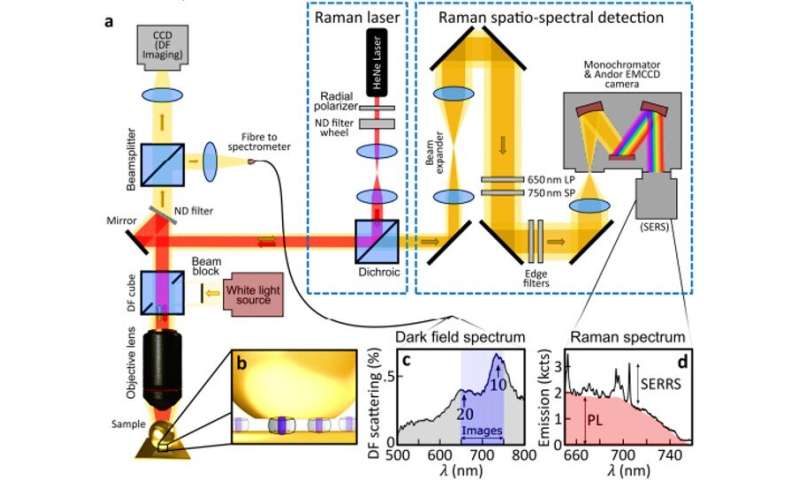 Nanophotonics can confine and couple light to nanoscale objects. For example, researchers can place a light-emitter in a high-quality optical cavity and confine the light for a long time for coupling to occur between matter and light. The coupling can produce new forms of light to facilitate imaging, localizing and nano-object manipulation at the level of single photon emitters for many applications and fundamental studies. The ability to confine optical fields is significant for nanoscale sensing, advanced spectroscopies, biological applications, single-atom optics, low-power switches, quantum information networks and non-linear optics. In the present work, Horton et al. carefully selected plasmonic architecture to control confined optical modes, allowing them to access near-field positional information, based on far-field radiation pattern measurements, ultimately to facilitate advanced technical applications.

To generate high-quality, high-volume data, they explored a new architecture that contained a gold nanoparticle (AuNP) coupled to its image charges on a gold (Au) mirror to form the nanoparticle-on-mirror (NPoM) architecture, separated by a self-assembled molecular layer. The architecture was extremely robust, forming reliable plasmonic nanocavities via self-assembly to study thousands of identical nanostructures on a single substrate. The research team placed the near-spherical AuNPs (diameters of 60 or 80 nm) on flat Au mirrors after uniformly coating them with molecules of methylene blue (MB) dye. They encapsulated the setup within a molecular container of cucurbit[7]uril (CB[7]). The CB[7] bound strongly to Au to form a constant spacing of 0.9 nm between the AuNP and Au mirror beneath, while also protecting the dye molecules and their vertical orientation in the setup. 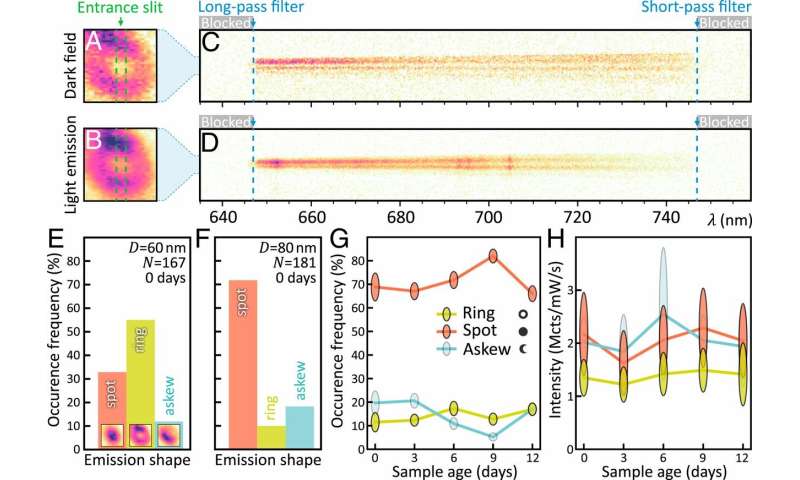 Real-space scattering and emission images from single NPoMs. (A and B) Spectrally integrated (647–747 nm) images of white-light dark-field scattering and light emission (in “ring” state). (C and D) Spectrally resolved emission through a vertical cross-section formed by the entrance slit (dashed lines in A and B) showing ring profile for both broadband PL and sharp SERS lines. (E–G) Relative occurrence of each shape (E, Insets) for D = 60-nm (E) and 80-nm (F and G) NPs. (H) Integrated emission intensity of 80-nm NPs, as sample ages after initial preparation. Vertical ellipses give SEs of fractions (G) and intensities (H) from N(t) NPs.

According to previous studies with NPoMs, light in the cavity could be out-coupled via one of two antenna modes containing either a transverse particle mode or a longer-wavelength vertical-field gap mode. In this case, the emission from molecules within nanoscale plasmonic gaps depended on nonnegligible contributions from a large number of nanocavity modes. The coupling of the modes relied on the precise position of the molecules in the gap, allowing them to be interpreted from far-field distribution of the out-coupled light. Horton et al. explored this complexity using finite element methods and confirmed similar emission patterns using finite-difference time-domain simulations. It was typical to observe a facet size (defect size) of 20 nm for 80 nm NPoMs, with MB dyes in this work. Technically, the team could place a plasmonic Au sphere on top of an emitter to act as a nanolens or plasmonic refracting globe to expand the resolvable field of view in the region.

The team therefore placed a plasmonic Au sphere on top of an emitter to act as a nanolens or plasmonic refracting globe to expand the resolvable field of view in the region. To observe the described nanolens effect, Horton et al. alternately recorded dark-field scattering and light emission from the same NPoM in time. They used a radially polarized continuous wave laser with a wavelength of 633 nm and power density of 150 µW.µm-2 at the focus, to excite the gap mode and individually image hundreds of NPs. They analyzed them spectroscopically after spatially magnifying the emitted light (∼3,500 times) into the entrance slit of a monochromator (a narrow-band wavelength filter with adjustable transmission wavelength) after spectrally filtering away the 633nm wavelength of the excitation laser.

The dark-field image formed via white-light scattering from each NPoM, typically assumed the form of a ring. However, due to polarization sensitivity of the optical system, the scientists observed slight asymmetries in the dark field images. Inelastic light emission observed due to a combination of photoluminescence (PL), surface-enhanced resonant Raman scattering (SERRS) and background electronic Raman scattering from Au also formed very different spatial shapes (spots, rings and askew halos). 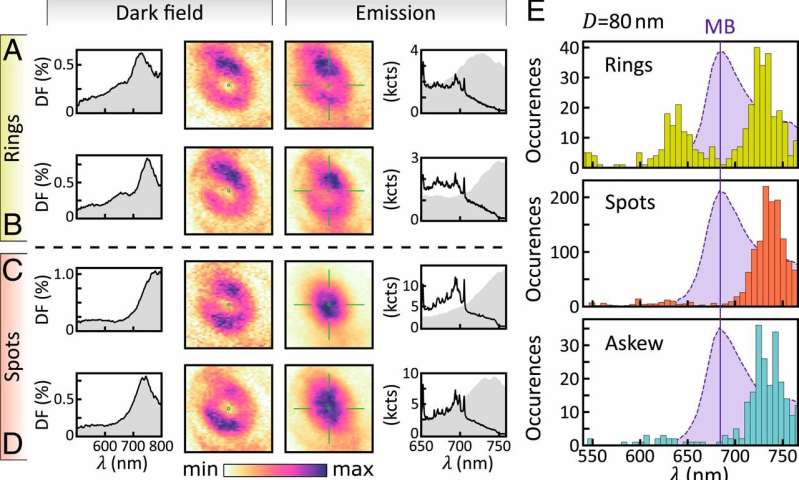 The inelastic emission also showed similar emission spectra, implying they all originated from the same dye molecules. During prolonged observations of a single NPoM, the team noted the far-field emission intensity and distribution of a particle to vary with time under illumination. The nanoparticle diameter determined the facet width, which controlled spectral tuning of the NPoM gap modes within the experimental setup.

The team further propose an intriguing application using Au nanoconstructs as nanolenses to reconstruct deep subwavelength images in real time, in order to track the movement of emitters inside the nanogap. They can also combine this method to resolve single molecules with existing approaches such as localization microscopy, previously used to obtain frame-by-frame images of each emitted photon. Horton et al. observed the complex interplay between the facet size and emitter position to produce different shapes in this work. Furthermore, the smaller NPs (40 nm) had a smaller scattering strength, which made their emission too weak to spatially resolve. The research team expect strongly coupled systems to facilitate observations of coherent interactions between emitters and the nanocavity. The work will offer a route to peer inside solvated molecule-metal interfaces under ambient conditions and resolve molecules within a few nanometres. These nanocavity gap modes can deliver nanometer-scale precision from single frames to locate single molecules, resolve how multiple active emitters are distributed and how they change spatially in time.

Nanoparticle chomps away plaques that cause heart attacks